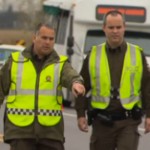 A driver described as an Islamic radical hit two Canadian soldiers, killing one of them, in Quebec on Monday. Law enforcement said Martin Rouleau had been “radicalized” and converted to Islam recently.

Rouleau hit two soldiers with his car before a police chase that ended with cops killing him when he emerged from his vehicle. Investigators say they’re looking into a possible terrorism connection. The other soldier remains hospitalized. Read more at CBC News.