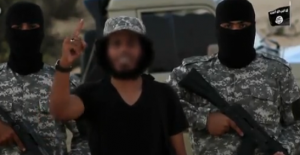 He sends a warning to “all the Jews, grandchildren of monkeys and pigs” that the Islamic State will come to Israel and slaughter all the Jews, Kikar reports.

In a message directed to “all the Jews, grandchildren of monkeys and pigs,” the man, whose face is blurred, warns that the Islamic State plans to infiltrate Israel to carry out attacks.

“We are coming for you from all over the world to slaughter you,” he says.