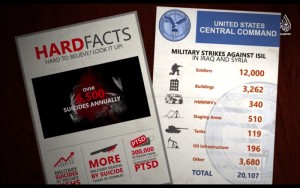 “So while you going around cooking the facts on the results of your military airstrikes, we continue to haunt the minds of your soldiers and sow fear into their hearts,” the video said.

It was reported in September that 50 U.S. intelligence analysts accused higher-ups of “changing their analyses to be more in line with the Obama administration’s public contention that the fight against ISIS and al Qaeda is making progress.”