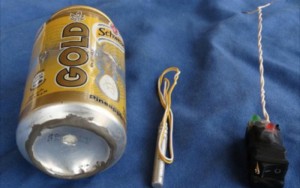 ISIS propaganda magazine Dabiq published an image claiming to be the bomb that brought down the Russian airplane over Sinai on October 31.

“On ‘30 September 2015,’ after years of supporting the Nusayrī tāghūt in the war against the Muslims of Shām, Russia decided to participate directly with its own air force in the war,” the magazine wrote. “And so after having discovered a way to compromise the security at the Sharm el-Sheikh International Airport and resolving to bring down a plane belonging to a nation in the American-led Western coalition against the Islamic State, the target was changed to a Russian plane.”

The purported bomb appears to be a soda can.