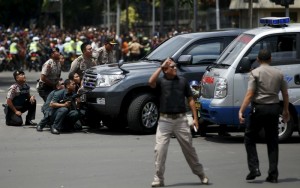 Indonesian officials say insurgents linked to ISIS were behind the lethal coordinated midmorning attack in the commercial heart of its capital that left five gunmen and two others dead Thursday.

“We have detected communications between a Syrian group and the Solo group,” Deputy Police Chief Budi Gunawan told The Wall Street Journal, referring to a suspected domestic terror cell in the Javan city.

The country had already been on alert after police arrested ISIS-linked militants planning attacks in December, and police said Thursday’s suspects were from the same group.

The downtown siege began at around 10:50 a.m. local time with a series of bomb blasts across the district, with assailants wielding grenades and guns charging through the district. Images from the scene show bodies in the streets, and a Dutch United Nations worker was among those critically injured.

The first explosion went off in a parking lot near a Starbucks café adjacent to the Sarinah shopping mall, near many of the city’s luxury hotels, offices, and embassies.

Witnesses say six more blasts went off over the next 10 minutes, including one at a police post at a traffic intersection, the Jakarta Globe reports, while a gunfight broke out between police and at least one suspect in a nearby movie theater. Armored personnel carriers moved into the streets and authorities declared the offensive over at 3 p.m. The attacks come after several recent police warnings that ISIS militants were planning a “concert” in Indonesia, citing a document seized from the local terror group.

President Joko “Jokowi” Widodo condemned the attacks. “Our nation and our people should not be afraid, we will not be defeated by these acts of terror,” he said, according to MetroTV.  Read more.