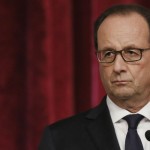 Extremists affiliated with Islamic State have kidnapped a French national in eastern Algeria and issued a video threatening to kill him if President Francois Hollande’s government does not halt its Iraq air strikes. The group, which calls itself the Caliphate Soldiers, published a video on the Internet on Monday claiming responsibility for the kidnapping and showing a man who identified himself as Herve Gourdel, a 55-year-old from Nice, France.

The French foreign ministry confirmed the video was authentic. France has joined the U.S.-led coalition against ISIS, and launched its first air strikes against Islamic State in Iraq on Friday.

Gourdel was kidnapped hours after ISIS urged followers to attack citizens of the U.S., France, and other coalition countries. ISIS recently beheaded two Americans it had abducted. Read more.