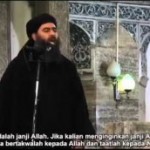 ISIS leader Abu Bakr al-Baghdadi’s ex-wife was one of the prisoners released in a swap between Lebanon and the Nusra Front, NBC News reports.

Saja al-Dulaimi was seen being taken to Eastern Lebanon on footage aired by Al Jazeera.

As many as 12 prisoners were swapped for 16 Lebanese security forces. Read more at NBC News.