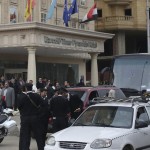 ISIS said today its members carried out an armed attack on Israeli tourists in Cairo in response to a call by the group’s leader Abu Bakr al-Baghdadi to target Jews “everywhere”.

The group said in a statement released online that light arms were used in the attack, which took place on Thursday outside a Cairo hotel when attackers targeted a bus full of tourists.

In Yerushalayim, Alon Lavi, a spokesman for Israel’s Foreign Ministry, said the bus that was hit was in use by a group of visiting Arab Israelis but that no one was inside the bus at the time of the incident and that no Israelis were hurt. He said Israel was briefed on the incident by the Egyptian Foreign Ministry.