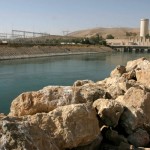 In what could be a devastating development for Iraq, Sunni militants who are part of ISIS have reportedly captured the Mosul dam, which is the largest in the country. The dam sits on the Tigris River 30 miles northwest of Mosul, and controls electricity and water for a large territory.

According to reports, it was captured from Kurdish forces, or pesh merga. A U.S. report from 2007 warned that if the dam fails, a 65-foot wave of water could hit a large swathe of northern Iraq. Elsewhere in the north, thousands of religious minorities fleeing from ISIS to the mountains are starving and dying of thirst. President Obama is now considering airstrikes as well airdrops of food and medicine. Read more at the New York Times.