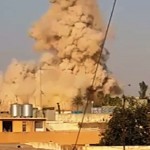 A new video shows jihadists from the Islamic State of Iraq and Greater Syria (ISIS) blowing up the kever of Yonah Hanovi in Mosul, Iraq.

Several residents of Mosul confirmed to the Associated Press that the kever of Yonah Hanovi, which is housed inside of an ancient mosque, was completely destroyed.

In early July, a different video was circulated showing a jihadist from ISIS allegedly smashing the kever. . But that video was later proven to be fabricated.

Radical Muslims consider any special veneration of tombs or relics to be against the teachings of Islam.

Since sweeping through the region, ISIS jihadists have destroyed several important cultural artifacts in Iraq and Syria. More recently, after taking control of a Syrian Orthodox Cathedral in Mosul, the group destroyed the crosses and replaced it with the black ISIS flag.

ISIS’s reputation for brutal medieval-style Islamic justice has grown. Earlier this month, the terror group ordered all remaining Christians in Mosul to convert, flee or face death. Meanwhile, the U.N. has also reported that ISIS has ordered female genital mutilation in Mosul.