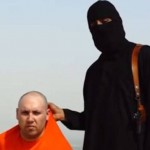 ISIS claims in a new video released today to have executed Steven Sotloff, the American journalist who was shown in last month’s video execution of James Foley. In the previous video, ISIS threatened Sotloff would be killed unless the U.S. stopped airstrikes in Iraq. Today he was beheaded.

Last week, the 31-year-old freelancer’s mother released a video plea to the group to spare her son. “As a mother, I ask your justice to be merciful and not punish my son for matters he has no control over,” she said.