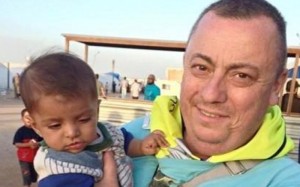 ISIS released a new video today, Erev Yom Kippur, showing the beheading of British aid worker Alan Henning. The jihadists warned that American Peter Kassig, a medic and ex-U.S. Army Ranger who was working in central Syria as of last October, will be killed next.

Henning, 47, was an aid convoy volunteer who was captured by ISIS in Syria nine months ago and is thought to have been held with 20 other Western hostages. Members of the convoy Henning was helping when he was captured have described armed men surrounding a warehouse where the convoy was delivering medical equipment. Gunmen claimed they were suspicious of Henning because he was not Muslim and separated him from the group. In the video showing his beheading, Henning’s executioner, in a London accent, says, “If you, Cameron, persist in fighting the Islamic State, then you, like your master Obama, will have the blood of your people on your hands.”

The other ISIS hostage is Peter Kassig, a 25-year-old native of Indiana. Kassig founded an emergency aid group for Syrian refugees in Lebanon and Syria called Special Emergency Response and Assistance (SERA). The organization provided medical assistance, medical supplies, clothing, food, and cooking stoves, and fuel to refugees. In an interview with Timelast January, Kassig described his goals for his organization.

“The idea is for SERA to supplement the efforts of larger organizations by focusing on delivering aid materials that can do the most good for the most people over the longest period of time possible. I believe that how and why we do what we do is equal in importance to what we do. It’s about showing people that we care, that someone is looking out for those who might be overlooked or who have slipped through the cracks in the system for whatever reason.”