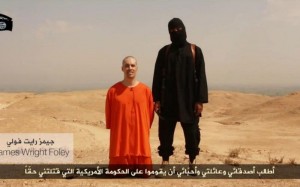 In a video posted online today, ISIS beheads James Wright Foley, an American freelance journalist who was captured in Syria in 2012. The video says the killing is a warning to the U.S. to end its intervention in Iraq. Before he was decapitated, the journalist was forced to denounce his own country.

The video also shows Steven Sotloff, a freelance journalist working for Time, and threatens that he will be next. Sotloff’s kidnapping seems to have been kept secret until now. Foley was working as a photographer in Syria for AFP when he was taken. The year prior he had been kidnapped in Libya. Read more at NBC News.