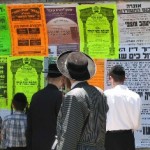 An old friend whom I had not seen in close to three decades made a comment to me when we met at the Kotel on leil Shabbos. He said that despite his having been away from Eretz Yisrael for more than 25 years, everything was still so familiar to him. Walking through Geula and Meah Shearim on erev Shabbos, leil Shabbos at the Kotel, davening in the shteiblach at Zichron Yaakov-it all felt the same as it did the last time he was there.

I beg to differ. While those experiences haven’t changed much, I found that the mood on the streets has changed considerably. While Israelis are always passionate about what they believe in, especially in times of new elections, the sense of disparity and machlokes has permeated the atmosphere and can be felt in every corner of the land.

I was in Eretz Yisrael a little over two years ago during the campaigning for the last election, and while there is always public posturing and bickering going on, I found things to be different this time around. It’s no longer limited to Sephardim vs. Ashkenazim or chareidim vs. chilonim as it was in the past. Now it’s chareidim vs. chareidim, Sephardim vs. Sephardim. Even worse, it has risen to such a painful level that our once safe havens, our beloved yeshivos, have not been spared. What makes this phenomenon so frightening is that there is no solution. In the words of the gadol ha’dor in Bnei Brak, Rav Ahron Leib Shteinman, shlita, “there is no remedy for machlokes.”

While machlokes is nothing new in KlalYisrael, what makes this situation particularly intolerable is that “ein bayis asher ein sham meis,” there is not even one sector or group in Klal Yisrael today that is not imploding due to internal machlokes.

The mantra of the great Torah leader Rav Moshe Sherer, zt’l, throughout the decades that he led the Agudah was to avoid machlokes at all costs. He would quote repeatedly from his rebbe, the Baltimore rosh reshiva, Rav Ruderman, zt’l, that “mutav l’ha’amid tzelem b’heichel, v’al yarbeh machlokes b’Yisrael.” (Better to place an idol in the Sanctuary than to increase division among Israel.)

The rav of the town Kampena, Rav Yisroel Yonah Landau, fired the popular chazzan. While he had a beautiful voice, he was clearly lacking in religious observance. The members of the community strongly opposed the firing of the chazzan. The rav wrote a she’eilah to the rav of Posen, the son-in-law of the Nodeh BiYehuda, for advice on how to deal with this growing machlokes. He responded with the above-quoted phrase, “Mutav l’ha’amid tzelem b’heichel, v’al yarbeh machlokes b’Yisrael.” Today, this valued way of life has been lost.

In a private discussion with a world-renowned rosh yeshiva several months ago, I mentioned a particular machlokes that has had a serious impact upon the community. The roshyeshiva gave a painful krechtz and said that his days and nights are filled with trying to mediate between sides in various machlokos that have risen in so many different chesed and Torah institutions. Being somewhat alarmed at the depth of the roshyeshiva’s pain at this situation, I offered some divreichizuk that I thought would make a difference to him.

I commented that the roshyeshiva is just continuing in the footsteps of his great father, zt’l, who was the arbiter of many machlokos in his days. The roshyeshiva, however, explained that the disputes today are significantly different from the ones his father dealt with years ago. After time and much effort, those disputes would usually be resolved. In today’s machlokos that are rampant throughout Klal Yisrael, despite the best and constant efforts, they remain unresolved; the machlokes remains a machlokes. This was clearly a source of great frustration to the roshyeshiva.

In just the several days I was in EretzYisrael, I saw a poster featuring the head of Eli Yishai on the body of a pig, with bold letters screaming “traitor”; I saw leaflets depicting a picture of one of the ziknei ha’dor, revered by Torah Jews throughout the world, with the title “Mr.” by his name; and saw in the headlines of every newspaper in Eretz Yisrael, from the Jerusalem Post to the Maariv, etc., news of the blood stains on the floor of a prominent yeshiva that was the result of a long-standing dispute that ultimately erupted.

Whenever I have the z’chus to visit Eretz Yisrael, I try my best to join thousands of fellow Yidden being mekabel Shabbos at the Kotel. I’ve done so hundreds of times over the years, and it never ceases to provide inspiration for me. As I stood off to the side and watched every inch of the Kotel Plaza fill with Yidden of all walks of life davening in minyanim of all stripes, all singing and dancing in honor of Shabbos, I couldn’t help but notice that in every circle, dancing arm-in-arm, were chassidim, Sephardim, chilonim, chayalim, yeshiva students-a perfect symbiosis of “k’ish echad b’lev echad.”

I commented to my friend Rabbi Pinchos Lipschutz, publisher of the American Yated Ne’eman, that if someone from outer space would suddenly land his spaceship at the Kotel on leil Shabbos and take in the scene around him, he would surely comment that there is not a people in this whole universe that is more b’achdus than KlalYisrael. If he would stroll amongst the various minyanim and see one minyan with the children from Chai Lifeline in their wheelchairs being led in a spirited circle by the bnei yeshiva accompanying them, a lively davening by the volunteers of Oorah, the Shuvu Russian children holding on to their silk yarmulkes while sitting on the shoulders of their counselors and rebbeim, our friend would no doubt express himself with the very words that HaKadosh Baruch Hu has inscribed in His very own “tefillin,” “Mi k’amcha Yisrael, goy echad ba’aretz.”

If machlokes has no remedy and it has already permeated every segment of Klal Yisrael, what is left for us to do? I believe the legendary Tzaddik of Yerushalayim, Rav Aryeh Levine, zt’l, provided the answer for us. It was well known in Yeshiva Eitz Chaim in Yerushalayim, where Rav Aryeh served as mashgiachruchani, that he would personally get involved any dispute or machlokes, no matter how small, to make sure that it was resolved. One time, after a minor dispute arose between two boys, Reb Aryeh would not let either of them return home without asking the other for mechillah. When he was asked why it was so important to do so, he explained that shalom is such a positive force in the world that every moment of shalom created, even if just between two young boys, can have a profound effect upon a raging fire of machlokes somewhere in the world.

If the level of machlokes in Klal Yisrael truly troubles us-and how can it not?-then we can do our part to stem the tide by bringing even the smallest amount of shalom between two people-especially if one of them is us.