The ad at the left, from the Mike Bloomberg campaign, has appeared in a number of frum weekly newspapers, including The Jewish Press, Yated Ne’eman and Hamodia. Some, however, are claiming that the mayor creates an issue, ‘solves’ it, and then takes credit for it.

The ad touts that “even in tough budget times” the mayor “found a way to save more than 2,000 Priority 7 after-school vouchers, providing much needed relief to families in our community.” Of course, it was Bloomberg who threatened to cut the $16 million voucher program in the first place, sparking fury among frum families who have been its primary benefactors since it was first created 12 years ago.

The City Council and frum advocates mounted a campaign to save the program, and, in a repeat of the last time this occurred (2004 – a year before the mayor’s first re-election bid), the money ended up being restored during budget negotiations. 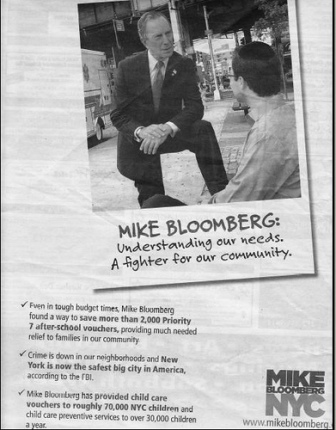 The voting power of the Orthodox community, which tends to cast its ballots in a bloc, has been the subject of much dispute, with some saying too much effort expended by elected officials to woo this particular special interest.

As with any other group of voters, the clout of the Orthodox depends largely on turnout, which has been hit-or-miss in past elections.

However, if leaders do turn out the vote, it is all-but guaranteed to go to whichever candidate they’ve instructed the community to support – and that’s not something to be trifled with.

In the case of the Priority 7 fight, Orthodox advocates say, voters were perhaps angry enough to stay home on Election Day, robbing Bloomberg of key votes, but not likely to support his expected Democratic rival, Comptroller Bill Thompson.