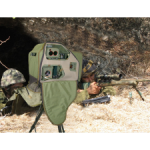 Israeli arms-maker, Rafael Advanced Defense Systems, says they have a solution to keep friendly forces safe from snipers during fighting, like in the recent Operation Protective Edge in Gaza, and elsewhere, Israel’s Channel 2 News reported this week.

Rafael‘s SpotLite-P electro-optical system, developed in conjunction with the US Army, helps ground forces locate and stop enemy sniper fire, according to the manufacturer.
The visual system recognizes the muzzle flash from the distant shooter, fires a laser to define the exact coordinates of the outgoing fire, and relays the information to friendly sniper forces and other units, in order to greatly shorten response time.

The system’s FLIR thermography camera and associated gear can spot fire sources at over a kilometer away, and can locate, identify and record several targets at once, the firm boasts.

Watch a video of the system in operation HERE.