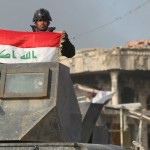 Abadi said in a televised address Iraqi forces would deliver the “fatal and final blow” to ISIS in seizing Mosul.

Government forces declared victory in Ramadi after fighting to retake the city for weeks.

Local television media show soldiers raising the Iraqi flag over the government compound in the city center. The army acknowledged pockets of resistance may remain, but said forces no longer faced any clashes in the city. Read more at BBC News.