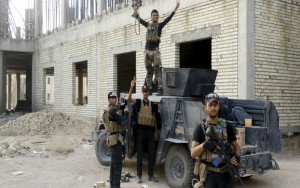 The Iraqi military said on Sunday its forces have seized control of a former government complex in Ramadi, the remaining stronghold of ISIS militants in the major city.

Military spokesman Sabah al-Numani told Reuters the compound was “under complete control” and there was no sign of ISIS fighters, but acknowledged that there still could be some areas of resistance.

The mainly Sunni Arab city fell to ISIS in May, in what many considered an embarrassing defeat for the army. Read more at BBC.