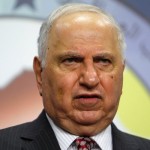 Veteran Iraqi politician Ahmed Chalabi, most remembered for his role in convincing the United States to invade his country and topple Saddam Hussein in 2003, died Tuesday of a heart attack in Baghdad, Iraqi state television reported. He was 71.

The secular Shiite was seen as a major proponent behind the U.S invasion and had provided information on Iraq’s weapons of mass destruction, which was later discredited.

Chalabi returned from exile after Saddam’s fall and was seen as a potential candidate to lead the country, but was sidelined by other Iraqi leaders. Chalabi was the chairman of the parliament’s finance committee and previously had served as a deputy prime minister. Read more.