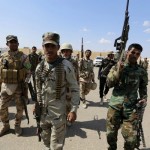 The Iraqi ministry of defense said in a statement that one officer was killed and nine were wounded.