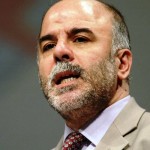 “Now the Iraqi people are in your hands,” Massoum told Abadi as they shook hands in a ceremony in Baghdad. On Sunday, al-Maliki announced on Iraqi television that he would go to court against the country’s president, Fouad Masoum, to keep his premiership after Masoum failed to direct him and his bloc in parliament to form a new government.

“What is happening today is a coup against the constitution, a deliberate violation of it by the president,” he said in a statement. Read more at the Washington Post.