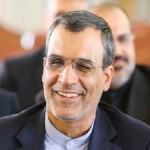 An Iranian official has warned Turkey not to engage in negotiations to normalize relations with Israel.

“The Muslim governments should adopt policies which meet their and the Islamic Ummah’s interests as well as the rights of the Palestinian nation,” Iranian Foreign Ministry Spokesman Hossein Jaber Ansari told reporters in Tehran, the Fars News Agency reported.

“The Turkish government shouldn’t pursue a different path (in relations) with the Quds (Jerusalem) occupying regime under such conditions that its relations with the neighboring governments have gone under certain developments,” Ansari said.

Ansari’s comments follow reports that Israel and Turkey are close to normalizing diplomatic relations after the 2010 Mavi Marmara incident in which Israeli commandos boarded the flotilla that was attempting to break the blockade of Gaza and nine Turkish citizens were killed in clashes.

On Monday, Turkey expelled Hamas’ senior representative in Istanbul, Saleh al-Arouri, which was one of Israel’s requests for normalization.

However, Turkish President Tayyip Erdoğan reportedly said he will continue to support Hamas in spite of Israel’s request to end relations.