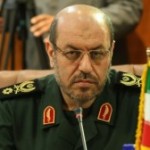 A senior Iranian official said that his country would soon test new missiles to demonstrate the ineffectiveness of US sanctions, Tehran’s semi-official Press TV reported on Monday.

Defense Minister Brigadier General Hossein Dehqan called recent US Treasury sanctions imposed on Tehran’s missile program “a futile effort to undermine Iran’s defensive might.” Dehqan said the restrictive measures would have no impact on the progress of Iran’s missile technology because it was entirely domestically developed and produced.

According to a statement issued by the Iranian Ministry of Foreign Affairs, Tehran’s missiles do not violate any international law or ruling. Iran would therefore not allow the United States to unilaterally stop it from upgrading its “defensive and deterrent missile program.”

The statement said Iran’s ballistic missiles were exempt from the Joint Comprehensive Plan of Action’s restrictions because, it claimed, they were not meant to carry nuclear warheads, Fars reported.