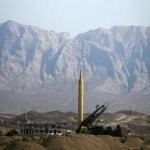 Iran announced a new underground missile depot on Tuesday, following an announcement last week that the country would soon expand its program. State television reportedly showed Emad precision-guided missiles, which the U.S. has said can take a nuclear warhead.

Iran’s decision to publicize the ballistic-missile program came only days after the White House delayed imposing sanctions on companies and individuals in Hong Kong, Iran and the United Arab Emirates with ties to it. Read more.