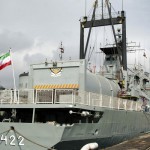 “Our warships will soon berth at ports in the Atlantic Ocean,” Navy Commander Rear Admiral Habibollah Sayyari promised at a ceremony on Wednesday marking the return to port of Iranian warships that Fars said had taken part in joint drills with the Russian navy.

Sayyari said the Iranian vessels had been in the Caspian Sea and at the Russian port of Astrakhan. “The presence of Iranian warships in international ports shows the Iranian Navy’s prowess,” Fars quoted him saying.

Sayyari made a similar pledge to deploy warships in the Atlantic in early 2014. At the time, Iran promised to send its fleet close to American maritime borders as a counter to the US navy’s presence in the Gulf. But in April, the navy chief said the move had been canceled “due to a change in schedule.”

The US-Iran relationship remains tense and friction-filled, despite the US-led world powers’ deal with Iran, sealed in July, on curbing its nuclear program.

Iran’s supreme leader Ali Khamenei has repeatedly rejected any future talks on other issues, and ruled out normalization with the United States.

The former Iranian president Hashemi Rafsanjani was reported to have admitted this week that the country’s nuclear program was started with the intent of building a nuclear weapon, with the express consent and participation of Khamenei. “Our basic doctrine was peaceful usage of the nuclear technology although we never abandoned the idea that if one day we are threatened and it is imperative, we would have the capability for going the other path [to nuclear weapon] as well,” Rafsanjani reportedly said.