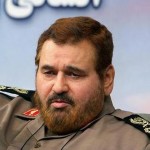 Iran’s army chief said on Wednesday the seizure of two U.S. navy boats and their 10 sailors should be a lesson to members the U.S. Congress trying to impose new sanctions on Tehran. Reuters reports.

“This incident in the Persian Gulf, which probably will not be the American forces’ last mistake in the region, should be a lesson to troublemakers in the U.S. Congress,” Major General Hassan Firouzabadi, head of Iran’s armed forces, was quoted as saying by Tasnim news agency.