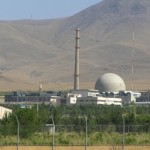 “We expect it will be in early January,” Araqchi told reporters in Vienna following a meeting with the International Atomic Energy Agency (IAEA), the U.N.’s nuclear watchdog agency.

Under the nuclear deal signed in July, Iran must take a number of steps, including scaling back its uranium enrichment capabilities and reducing its stockpile of enriched uranium, in order to have international sanctions reduced.

But a report by the IAEA last week said Iran has yet to take a number of steps to fulfill its commitments under the nuclear agreement. According to the IAEA, Iran has so far only removed 4,500 uranium enrichment centrifuges over the past month and needs to dismantle an additional 10,000.

The report also said that Iran must reduce its stockpile of enriched uranium from 8,300 kilograms to 300 kilograms before the deal can be implemented.