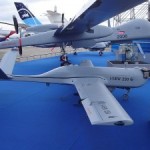 Iran said on today that it shot down an Israeli spy drone that was heading for its Natanz nuclear enrichment site, Iranian media reported. “The downed aircraft was of the stealth, radar-evasive type and it intended to penetrate the off-limits nuclear area in Natanz … but was targeted by a ground-to-air missile before it managed to enter the area,” state news agency ISNA said, citing a statement by Iran’s Revolutionary Guards, Reuters reported.

The Natanz facility is one issue at the heart of a long-running dispute between Iran and countries that believe it is seeking nuclear weapons capability, something Tehran denies.

The Revolutionary Guards said of the drone incursion: “This wily act further exposed the Zionist regime’s adventurous temperament and added yet another black page to a record filled with crime and mischief.”