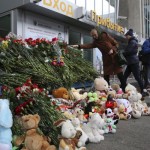 The Russian airliner that crashed on Shabbos in the Sinai Peninsula was not struck from the outside and no distress call was made by its crew, according to an investigator with the group probing the flight recordings.

A panel of French, Egyptian, and Russian experts are examining the black boxes recovered from the Metrojet wreck, in which 224 people were killed shortly after takeoff from Sharm el-Sheikh en route to St. Petersburg.

Earlier today, an airline official blamed a “mechanical impact on the aircraft” and ruled out technical issues or human error. The tail section of the Airbus 321 evidently broke off from the rest of the plane, possibly the result of damage sustained in a 2001 accident. Read more.