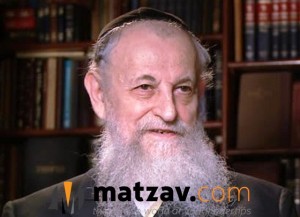 When 5,200 Chabad-Lubavitch emissaries and guests gather on Sunday evening for the grand banquet of the annual International Conference of Chabad-Lubavitch Emissaries (Kinus Hashluchim), they will be joined virtually this year by 93-year-old Rabbi Herschel Feigelstock, the former principal at the Rabbinical College of Canada, who plans to watch the live broadcast from his home in Montreal. The Vienna-born rabbi will be marking 70 years since he became a shaliach when he accepted a part-time position teaching in Chabad’s nascent parochial school for boys while still a student around the end of World War II.

Here, the rabbi shares his memories of Chabad in pre-war Europe, as well as the early years of Chabad’s growth in Canada, where he has lived since being released from a British internment camp during World War II.

Q: Can you share a bit about your childhood? What was Jewish education like in Vienna in the 1930s?

A: I grew up in the Viennese Orthodox community, which was very traditional and very learned—but decidedly non-Chassidic—following the traditions of the Chatam Sofer. Between the world wars, many Chassidic Jews from Galicia came to Vienna since Galicia had become part of Austria, but it didn’t really carry on to the youth.

My father was a learned man—a businessman who made sure to teach Torahevery morning and every evening, and who lectured for several hours every Shabbat.

There was just one Jewish school in Vienna at the time. In certain respects, it was similar to a public school except that the children did not go bareheaded, and they were given off on Shabbat instead of Sunday. Of course, there were also rudimentary Judaic studies in the afternoon, but it was not nearly enough for families wishing their sons to becomeTalmud scholars. Those families would make sure to send their sons for additional classes in the afternoon.

When my father had the means, he pulled my brother, who was one year older than me, and me out of school and had us privately tutored. We learned Talmud in the morning and secular subjects from a religious teacher in the afternoon. We would go twice a year to be tested in a public school, but that was it. When my father was no longer able to afford private tutoring, he invited some others to join us, and we formed a group. 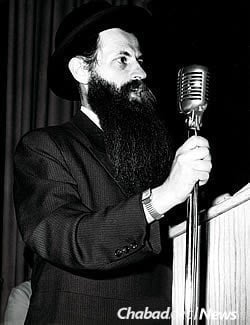 Within years of his release from a British POW camp, the rabbi begame a recognized leader within the Montreal Jewish community.

A: The Previous Rebbe would visit Vienna for his health. After being abused in Soviet prison in 5687 [1927], he suffered from various ailments and he came to see specialists.

He was very well-known. First of all, everyone knew about his heroic efforts to keep Judaism alive behind the Iron Curtain. And even though he was a visitor, he took a very deep interest in the Viennese Jewish community, as I suppose he did wherever he went. He cared about our spiritual and material well-being; this was felt by everyone.

My father arranged that our group should visit in the hotel where the Previous Rebbe was staying—the Jewish-owned Hotel Continental on Praterstrasse. We boys stood in a semi-circle around the Rebbe’s table. One by one, we walked by his seat and kissed his hand. He then spoke to us lovingly, with such care and devotion. Years later, in New York, my father would remind the Rebbe that he spoke about the verse Chanoch lenaar, King Solomon’s exhortation to educate each child according to his way.

The Rebbe’s eyes and face lit up when he heard that from my father. Incidentally, when we were finished, we once again passed by his table, but this time he told us just to shake his hand and not kiss it.

This was my first encounter.

The second time I saw the Previous Rebbe was when word went out that he would be reciting a maamar, a Chassidic discourse, in the lobby of his hotel. I went with a fellow whom I studied with, and we joined the crowd of listeners. I was just around bar mitzvah age at the time.

Q: When did you first meet the Lubavitcher Rebbe? 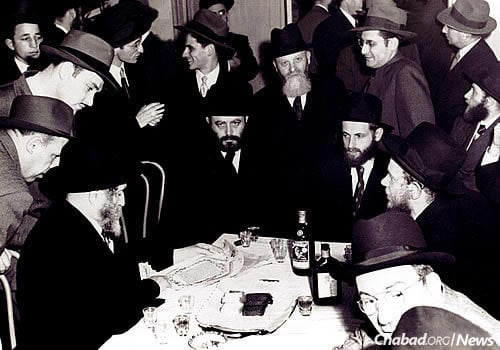 At his wedding reception,Feigelstock is flanked by the Rebbe and Rabbi Menachem Zeev (Volf) Greenglass. Standing behind him is his father, with whom he had recently reunited after years of separation.

A: During those visits, I also encountered the future Rebbe. I remember that he looked very young. He struck me as an anomaly.

On one hand, he wore a gray suit, a gray fedora with a down-turned brim and a wrist watch. These were seen as “modern” in our community, where black homburgs or other hats with upturned brims were expected, as were pocket watches.

Yet, it was very clear that he was devoted to Chassidism in a way that few young men were. Like I said, there were many Galician Chassidim in Vienna at the time. While some of the older men wore silk kapotes [long black coats] on Shabbat, almost none of the younger fellows did. Yet here was a man with a gray hat who was particular to wear the traditional Shabbat silk. It was very striking.

Q: How did you survive the war and come to Canada?

A: The war came and our family escaped to Budapest. We were not legal there, and my father wanted us to leave Europe at all costs. He knew that there was no safe place for Jews on that continent.

My father arranged passage for my brother and me to go alone to England. We said goodbye, fully expecting never to see each other again. And indeed, it would be many years until we’d be reunited with our parents, who managed to escape to Uruguay and then make their way to New York, where we met again in 5708 [1948].

It pains my heart to remember the naiveté of the Hungarian Jews, who sat without escaping. They could have left, but they thought they’d be safe.

In any case, my brother and I were sent to England, where we studied in ayeshivah with other refugees. In 5700 [1940], we were arrested [and placed in an internment camp] since as Austrian nationals, we were viewed as enemies. Eventually, we were transferred to camps in Canada and ultimately released.

Our first stop was at the newly established Chabad yeshivah in Montreal, where we were warmly welcomed by the nine young war refugees who had recently come to Canada from Poland by way of Japan and China.

Q: What prompted you to become a student in the Chabad yeshivah?

A: We soon went to Toronto for a year, but I returned to Montreal, where I studied under Rabbi Mendel Zaks, the son-in-law of the Chafetz Chaim, since we felt that Toronto did not have the Orthodox atmosphere we craved.

I had a Chassidic soul, and was drawn to the Chabad yeshivah and their inspired way of serving G‑d. By 1943, I became a student in the Chabad yeshivah in Montreal. There were now 10 of us—the nine Polish boys, who were in their early 20s, and me, barely 20 years old.

Q: Who were some of the people who inspired you most?

A: I was very impressed by the nine students I had joined. They were alone in the world and very busy teaching younger children in the afternoon school they had founded. Still, they kept rigorously to the yeshivah study schedule.

One individual with whom I was especially close was Rabbi Volf [Menachem Zeev] Greenglass, a humble Torah scholar and Kabbalist of the highest order.

We would be visited regularly by Rabbi Shmuel Levitin, a senior ChabadChassid. He was the one who truly connected us to the Rebbe, who was then working under his father-in-law directing Chabad’s early outreach efforts, and known as the “Ramash.” 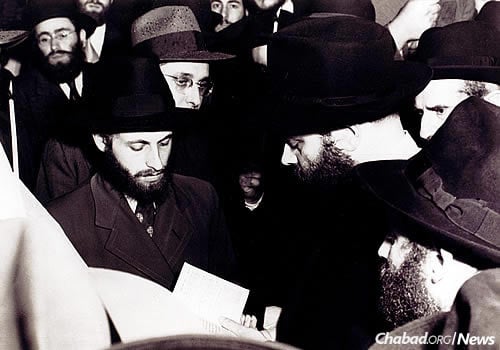 The Rebbe officiates at the chuppah of Rabbi Herschel and Sara Esther Feigelstock.

Q: How involved were the Rebbes with the nature of your work?

A: Both the previous Rebbe and the Rebbe were tremendously encouraging and very involved in every aspect of our work, and the work of all the young men and women who taught Judaism to children.

I’ll give you a few examples.

My wife grew up in Pittsburgh. When she was 11 years old, she wrote to the Previous Rebbe. She told him that she was active in leading Mesibos Shabbos—Shabbat-afternoon programs for children that Chabad was then holding in many cities. She also wrote to him that she wanted to go to New York to study in a Jewish school since there wasn’t one in Pittsburgh at that time.

The Previous Rebbe wrote her back a loving and detailed letter in Yiddish with an attached English translation. In it, he asks her about her Hebrew skills, tells her to remain home and supplies specific instructions on what she should include in her Mesibos Shabbos sessions. She was a little girl entertaining other children, but he took her work seriously, as if she were a colleague.

Shortly thereafter, he wrote a letter to a Chassid living in Chicago exhorting him to found a Mesibos Shabbos chapter there, saying that an 11-year-old in Pittsburgh has one. He not only encouraged her, but actually had her in mind and remembered her age.

Here’s an example from the Rebbe:

When I became principal in 1953, I began taking our high-schoolers to see the Rebbe every year. Before our group went to have our private audience, I wrote up a list of all the participants to give to the Rebbe.

At that time, there was a young girl named Kuchi Carlebach, who was active in spearheading Mesibos Shabbos in Montreal. One of the boys on the list was named Carlebach. The Rebbe immediately asked if he was Kuchi’s brother. It was clear to me that the young activists were high on the Rebbe’s mind.

Q: When did you begin teaching?

A: In 1945, I began teaching in the afternoons. I would study in the mornings and spend the afternoon with students. It was around that time that we purchased Chabad’s building on Park Avenue. I got married in 1949 and became principal in 1953.

Q: A recent immigrant from Europe, how did you communicate with the students?

A: In those years, the classroom was conducted in Yiddish. Most of the parents spoke only Yiddish, and virtually all Jewish children knew Yiddish in those days. We taught Judaic classes in the morning and secular subjects in the afternoon.

Almost all of the boys were from homes where Judaism was not fully kept. Today, many of them are grandfathers and great-grandfathers of fully observant Jewish families, both within the Chabad community and beyond. 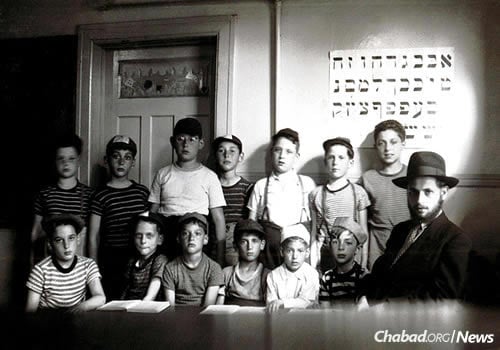 Rabbi Feigelstock with his students in 1946

Q: What were some of the early Chabad outreach activities?

A: Beyond the school, we began with Mesibos Shabbos and plays for children around the holidays and a day camp. Everything received a boost when were joined by Russian Chassidim who managed to leave the Soviet Union after World War II. The day camp led to the founding of the Gan Israel overnight camp outside of Montreal. Over time, the Lubavitch Youth Organization, led by my colleague and fellow educator Rabbi Berel Mockin, grew. More and more Chabad Houses were founded; now, there are 30 centers here.

Q: At that point, did you imagine that Chabad would grow as big as it has?

A: No one could have imagined what the Rebbe would do, both within the Chabad community and beyond. Then there wasn’t even a kosher bakery in Montreal, a city with 100,000 Jews. Today, there is so much. Yeshivahs, schools, shops, Kollels—a full and rich Jewish support system has sprung up from the seeds we planted so many years ago.