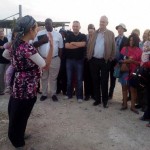 In a sukkah on a hilltop outside Jerusalem, 20 parliamentarians from around the world gathered together at the Psagot winery on Sunday evening, October 12 as part of a solidarity trip to Israel with the Israel Allies Caucuses.

The group spent Sunday touring Jerusalem and the outlying areas of the city with the Yesha Council, which included a visit to a factory in Ma’ale Adumim that employs Palestinian and Israeli workers.

For Pedro Galvez, a member of parliament in Guatemala, the trip to Israel with the Israel Allies Caucuses was an important experience. “The trip around Jerusalem and Judea and Samaria was very helpful,” he told Tazpit News Agency.

“It’s my second time here. As a congressman, when Israel-related issues come up in our parliament, it is important for me to know and see the reality in Israel that is not shown in Latin American media. This way I can share with my colleagues what I’ve learned about Israelis and Palestinians working and living together,” added Galvez.

Guatemala has a long history of supporting Israel; it was one of the first countries to recognize Israel as a Jewish state in 1948 and Israel has played a central role in providing the Central American country with humanitarian support throughout the years. But Galvez also wants to influence other countries in South America to care about Israel. “My colleagues in Guatamala respond well to what I have to say about Israel, but I want to influence other countries in South America who are less friendly.”

For David Burrowes, a conservative member of parliament in the UK, the timing of the Israel trip was also noteworthy in view of the symbolic vote on in the British Parliament to recognize a Palestinian state on Monday, October 13. “It’s one thing to discuss Mideast issues in the House of Commons in London and it’s another to see the reality on the ground,” Harris told Tazpit.

“The real voices on the ground don’t come out – that there is peace and coexistence among the people living in Judea and Samaria. Just seeing Israelis and Palestinians working together in a factory and living together was a reality check,” pointed out Burrowes.

“With the rise of ISIS, more people are thinking twice about the security situation surrounding Israel. During the recent conflict, as Israel was fighting against Hamas, one couldn’t help but think what would happen if ISIS were to take over a Palestinian state,” added Willem Griffioen, executive director of the Israel Allies Foundation’s Washington-based office.

The Israel Allies Foundation is an umbrella organization that coordinates the work of more than 30 Israel Allies Caucuses around the world in order to mobilize political support for Israel based on shared Judeo-Christian values. With global offices in Brussels, Berlin, Washington, Buenos Aires, and Israel, the foundation has 750 parliamentarians who present a unified voice of support and spearhead legislation for Israel-related issues.

“There is much hypocrisy in the BDS movement,” South African Member of Parliament, Kenneth Meshoe told Tazpit. “Israel is not an apartheid state and I’ve been voicing this actively in South Africa for the past 12 years as a member of parliament.”

The three-day conference, from October 12-14, which is co-sponsored by the World Jewish Congress and the International Christian Embassy Jerusalem, also featured a keynote address by Israeli President Reuven Rivlin at the Feast of Tabernacles.

“The hundreds of Congressmen and parliamentarians across the world who are active in our network of caucuses represent millions of Israel supporters around the world,” said Rabbi Benny Elon, President of the Israel Allies Foundation.

“It is imperative to know that there are millions of lovers of Zion whose voices can be channeled for political support for the State of Israel,” said Rabbi Elon.