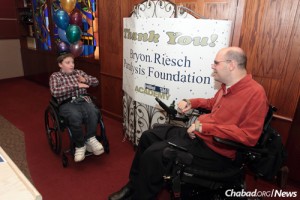 For 14-year-old Shmuely (Silas) Tebbitt, recess wasn’t always his favorite activity. While his classmates headed outside or to the gym, Shmuely had to hang back.

It wasn’t that he didn’t want to play basketball or baseball, but the teen, who has spina bifida, had outgrown his wheelchair. Not only that, but the wheelchair he’d been using for more than five years was heavy, bulky and falling apart. And when he wasn’t using the wheelchair, he was using crutches and pulling his entire body with his upper arm strength.

“My hands serve as my legs when I am standing, so I couldn’t use them for basketball or baseball, things like that,” says Shmuely, a seventh-grader at the Hillel Academy in Milwaukee, affiliated with Chabad-Lubavitch of Wisconsin. Plus, he says, he would tire easily because of all the weight he was pulling using his crutches.

However, wheelchairs are expensive with even basic models going for several thousands of dollars and the Tebbitt family’s insurance would not cover a new model.

Tired of seeing their friend struggling just to walk into school and not being able to join them for recess or on outings to the park and even, sometimes, to synagogue on Shabbos, a group of students at Hillel Academy took matters into their own hands to help their classmate get a new wheelchair.

Leading the charge was 13-year-old Avi Pullin, who has been friends with Shmuely for the last few years.

Avi discussed his plans with his mother, an attorney, who suggested the students try and find a grant that might help pay for a wheelchair. Their search led them to the Bryon Reisch Paralysis Foundation, a Wisconsin foundation that helps those with spinal injuries and neurological disorders.

While Avi’s mother wrote a formal proposal, the kids began writing letters to encourage the foundation to help Shmuely. Some of the kids typed their letters, others took pen to paper and wrote heartfelt notes by hand. 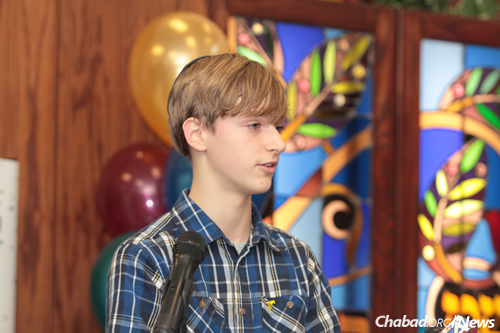 Leading the charge was 13-year-old Avi Pullin, who has been friends with Shmuely for the last few years.
“Writing everything is sometimes hard,” says 12-year-old Rebecca Kalmar, who also participated in the letter-writing campaign. “It’s hard to put things into words, but I knew Shmuely and wanted to help him because he’s a friend.”

In her letter, Rebecca wrote that despite being in a wheelchair, “[Shmuely] is very positive and his friends can always learn from him. He is a very kind and thoughtful person who loves nature. … He likes to have fun whether he is catching grasshoppers in the grass or playing games on the computer.”

“I think Shmuely needs a new wheelchair because he has trouble in school and in the neighborhood in getting around and keeping up with me and his other friends,” Avi wrote. “My friend Shmuely’s old chair has trouble with the brakes and is hard to push so he can’t participate with us. … It would make a huge difference for Shmuely to have a new chair because he could do so many more activities with us.”

Clearly the students were onto something because their campaign caught the attention of Bryon Riesch himself.

“Upon receiving the letters from Silas’ friends we were completely touched. The way that each one of them sincerely crafted the letters to help out a friend in need was truly inspirational,” says Riesch, who was paralyzed from the chest down after an accident in 1998. “In today’s world it’s refreshing to see children so unselfishly care for someone else. We were honored to be able to fulfill their request and help him live a more independent life.”

School officials were equally as moved by the students’ actions.

“It’s just so touching,” says Mrs. Devorah Shmotkin, principal of Hillel Academy. “There’s an inner drive and force within the students, a sense of confidence and of doing what’s right. They know what needs to be done and they will do it. It wasn’t a question of should we or shouldn’t we, but how are we going to get him there.”

The principal went on to say that “Being a Jewish school, we strive all the time to make their learning come alive for them; to take what they learn in Chumash, Navi or Talmud and apply it to their lives, whether that’s building meaningful friendships with seniors in a nearby nursing home or helping one of their friends.”

“Our students have leadership skills and values you don’t often see in kids today,” says Jennifer Huber, director of development and community engagement at Hillel. “For many kids today the logic is ‘How can I get a new Xbox or a new bicycle?’ a ‘What are you going to do for me?’ mentality. But for our students it’s all about ‘How can we affect change? What can we do to create a ripple effect?’”
On Tuesday, the school held a special assembly where Reisch officially presented the new, sleeker and more lightweight wheelchair to Shmuely.

“I feel very privileged to have very loyal friends and am also very excited,” says Shmuely, who proudly notes he scored his first two-point shot in basketball while a local news crew was filming a story about the wheelchair dedication.

As for Rebecca, Avi and their classmates, they don’t think they did anything all that special, even if the grown-ups around them know they did.

“It’s just helping out your friend,” Avi says. “And if you can, you should and I think a lot of people would do it if they could.”