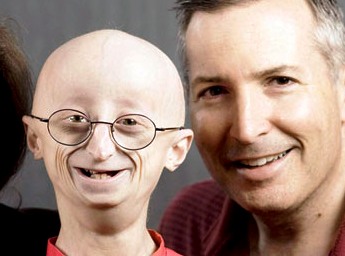 [Inspiring video below.] A Jewish teen whose fight against a rare genetic disease that causes accelerated aging was chronicled in an Academy Award-contending documentary has died. Sam Berns, from the Boston area, passed away on Erev Shabbos after a lifelong battle with progeria. He was 17, three years older than the typical life expectancy for children with the disease.

Sam came into the public eye through the documentary film “Life According to Sam,” which was broadcast last October on HBO. The film is on the shortlist for an Oscar nomination.Sam was diagnosed at just 22 months old. His parents, Dr. Leslie Gordon and Dr. Scott Berns, reacted to his diagnosis by creating the Progeria Research Foundation in 1999 to find the cause of the disease and a cure.

The foundation announced Sam’s death in an online statement.

The disease is extremely rare, affecting approximately one child out of every 1 million to 2 million births, with an estimated 250 children suffering from the disease worldwide.

In an interview with ABC News last year, Sam said he hoped his mother would one day be able to stop researching.

“I kind of just want my mom to be done with progeria for her sake, because my mom will keep working forever until progeria is cured,” he said.

After Sam was diagnosed, Leslie Gordon started to research the disease and found the gene that carried the disease and the abnormal protein that is higher in children with Progeria.

Clinical trials for a drug usually used to treat cancer appeared to show promise slowing down the aging process in progeria patients.

However, Gordon was simply trying to save her son and others with his condition.

“He gets off the bus, it’s a moment. And I treasure it,” Leslie Gordon told ABC News last year. “Every moment in and of itself is special to me.”

After the HBO documentary, Sam was able to raise awareness about the disease and participated in a TED Talk last year about old medications for new diseases.

He also became close with Patriots Chairman and CEO Robert Kraft, who said in a statement: “Words cannot express the sadness or the depth of sympathy I feel for [his family] today.”

Kraft said he had planned on asking Sam if he wanted to be honorary captain of an upcoming Patriots game, when he heard he had died.

“I loved Sam Berns and am richer for having known him. He was a special young man whose inspirational story and positive outlook on life touched my heart,” Kraft said.

While most children with the disease are expected to live only until age 13, Sam Berns turned 17 last year. ABC NEWS and Matzav.com.