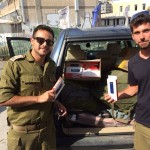 For many husbands, fathers, sons and brothers currently serving in Operation Protective Edge, it’s been a long few days or even weeks stationed on the front lines or in battle. But for families back home it can feel like a lifetime- with many having gone for extended periods of time without speaking with their loved ones.

Through an initiative of Tzohar, the religious Zionist rabbinical organization in Israel, several donors have funded an effort to make it easier for soldiers fighting in Gaza and stationed at the border to call home to their families. While safety concerns limit many of the soldiers from making phone calls from within the combat zone, a second limitation for many has been that their phones ran out of battery days ago and access to charging stations is extremely limited and sometimes even those who want to call are unable or have to resort to a few seconds on a friend’s phone.

After discovering A.L. , the one Israeli supplier who provides fully charged cell phone stick chargers (all other providers sell the product with the need to be charged upon purchase), late last night Tzohar bought out the complete stock of some 4000 chargers. Over the course of Friday, the chargers were being delivered to soldiers on the front lines from the Golani, Nachal, Givati, Paratroopers, Tanks, Engineering and Artillery Corps, with the hope of reaching them before Shabbos.

“As an active combat reservist, I know that the IDF takes full care of any and all needs of its soldiers,” said Nachman Rosenberg, Executive Vice President of Tzohar and the organizer of this operation.

“Nonetheless, we were looking for something practical that could have a meaningful impact in boosting the morale of both the soldiers and their families. We hope that this will enable families to wish Shabbat Shalom to their sons, husbands and fathers fighting Hamas terrorists on the front lines.”

After receiving his charger, Ophir, an officer in Golani expressed his gratitude to Tzohar and all those who contributed.

“Seeing the support from all over the world, we feel like we are not alone. Being able to call home to wish a Shabbat Shalom to my mother will not only make her feel better, but renews my strength in this important mission. You have no idea how much this means to us.”