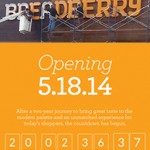 A new large supermarket in Boro Park scheduled to open shortly is named Breadberry. In a trend that began with Pomegranate in Flatbush, the growing cadres of modern upscale kosher supermarkets carry names that are designed to immediately trigger thoughts of gourmet and upscale foods rather than instant recognition of kosher. It was what was behind the Chestnut name in Williamsburg and Evergreen in Monsey. That is not to say that including kosher or glatt in the name has disappeared.

One of Monsey large kosher supermarkets is called Rockland Kosher. Chicago’s Hungarian Kosher is another example of long-standing name that has stood the test of time. Two leading supermarkets in Cedarhurst and Boro Park are named Gourmet Glatt. The growing number of one-stop kosher stores is competing for instant concept recognition, say marketing experts. Located in heavily populated Jewish neighborhoods, there appears no reason to include kosher in the name, hence names like Chestnut, Pomegranate and Evergreen. It coincides with what marketers say is the welcoming features of a supermarket that appeals to the five senses. A colorful produce display, a mouthwatering takeout section, and the aroma from a bakery are all designed to entice the shopper to fill a shopping cart.

But branding experts say that it all begins with the name, especially as a new entity that wishes to appear inviting and perhaps somewhat mysterious. With its name, the new Breadberry is seeking to attract customers “from the higher numbers” in Boro Park and perhaps from Flatbush with its main thoroughfare of 60th Street. Many of the neighborhoods better known kosher supermarkets like Gourmet Glatt, KRM, Goldberg’s and Landau’s are located “in the lower or mid numbers,” say kosher food distributors. Now all Boro Parkers have to worry about is parking.