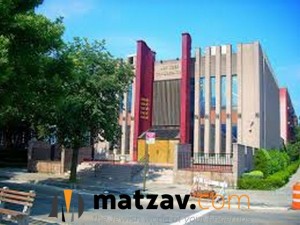 Flatbush, Brooklyn – A security incident Thursday morning at a local Flatbush shul serves as a reminder for all our community shuls and yeshivas to keep security cameras active, doors locked, and community members vigilant.

Thursday morning, at approximately 7:30 AM, a man appearing to be of Middle Eastern descent approached the Ahi Ezer shul at the corner of Ave S & Ocean Parkway in Flatbush, Brooklyn,

He attempted to enter through the front doors, but they were locked. He then proceeded to the side door on Ave S and entered through an unlocked door.
The congregants saw him, called Shomrim and NYPD, and then approached the perpetrator. The man exited the shul, and was followed by the congregants. The man seemed disturbed, and began yelling anti-Semitic remarks.

The security guards on duty across the street at the Sephardic Community Center rushed over to lend support as Shomrim and NYPD arrived. The assailant was apprehended by the NYPD and was transported to Coney Island Hospital as an EDP (Emotionally Disturbed Person).

Thanks to the 61 Police precinct and Flatbush Shomrim for a quick response. The Counter Terrorism and Intelligence units are currently investigating.