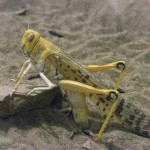 Israeli researchers at Tel Aviv University have designed a small robot inspired by locusts—those of ten makkos fame—that could play an important role in conducting automated surveillance and emergency response.

“The locust being a large insect that has wonderful jumping performance had offered itself as wonderful inspiration for this specific idea of a jumping…miniature jumping robot,” lead developer Professor Amir Ayali, of the Department of Zoology at Tel Aviv University’s Faculty of Life Sciences, told Reuters.

The robotic locusts—dubbed “TAUB” (Tel Aviv University and Ort Braude College)—are made from carbon robs, steel springs, and 3D printed plastic. They are powered by a lithium battery and are capable of reaching up to 1,000 jumps on only one charge.

According to the researchers, the robotic locusts can be used on anything from surveillance to entering situations and locations that are hazards for humans, such as oil spills.

The researchers also hope to one day to better understand the locust’s ability to swarm and implement that feature in the robotic systems.