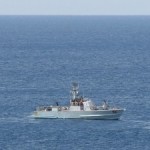 The defense system, which uses Barak 8 missiles, was upgraded to confront the growing threat of Russian-made Yakhont anti-ship cruise missiles. Yakhont missiles pose a threat mainly because of their potential use by Israel’s neighbors. Russia has been supplying Syria with Yakhont missiles since 2010. Lebanon-based Hezbollah is also believed to possess the missiles.

The test was conducted as part of a general overhaul of the navy’s defense systems, which also provide protection for offshore drilling rigs. Not all the test’s details were released, but according to the Israel Defense Forces, the exercise involved a mock Yakhont missile fired from sea, which was successfully intercepted by a Barak missile fired from an Israeli Navy missile boat.