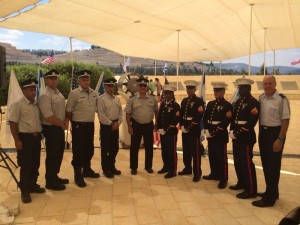 Jerusalem district firefighters and rescue volunteers, alongside U.S. Marines and families of 9/11 victims, marked the 13th anniversary to the September 11 terrorist attacks that left nearly 3,000 people dead in a special ceremony held in the Jerusalem Hills.

“It’s a very sad day – as firefighters, we can fully empathize with the families of the 343 New York City firemen who were killed on September 11,” Kobi Erez, the spokesman for the Jerusalem Fire and Rescue Services told Tazpit News Agency. “We are here to show solidarity with the firemen and everyone else impacted by this terrible event – those who entered into danger and fire to save lives and were killed doing so.”

Organized by the Keren Kayemeth L’Yisrael-Jewish National Fund, the memorial ceremony was held at the 9/11 Living Memorial Plaza in the Arazim Valley of the Ramot neighborhood in Jerusalem. The memorial plaza, which was inaugurated back in 2009 by the JNF, features the only monument outside of the United States that lists the names of the 2,977 victims of the 9/11 attacks including five Israelis who were killed.

U.S. Ambassador Dan Shapiro, who attended the ceremony, stated of the JNF 9/11 memorial that it was a “moving” monument, “where we gathered with friends today to remember those taken from us 13 years ago.” He also noted that, “Every year we come together to honor those who fell and those who served, the members of our larger American family whose destinies were touched by these acts of evil.”

Among the firefighters who laid wreaths on the memorial monument, was a new immigrant from the United States, Jacob, who made aliyah during the recent war and joined the Israel Fire and Rescue Services. “It was a very respectable ceremony,” noted Erez. “It was coming full circle to have Jacob with us as an Israeli firefighter laying down a wreath for the American firemen,” he told Tazpit.

“Firefighters share a common language and we are all like extended family,” concluded Erez of the U.S firemen who lost their lives.