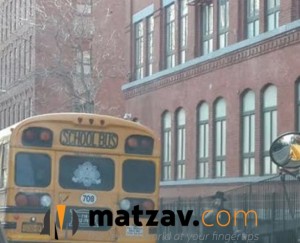 Brooklyn, NY – A massive fire that tore through a building in Bedford-Stuyvesant has created a transportation headache for some yeshivos in Williamsburg.

The fire on Nostrand Avenue near Flushing Avenue was located behind the Monroe Bus Company parking lot and occurred on Shabbos. Around 100 firefighters responded to battle the blaze, but the heat was so intense they were told to only fight from outside the structure.  There was fear that the rear wall of the building would collapse and cause injury.

Due to the proximity of parking lot to blaze, the entire lot has been cordoned off and is off-limits until the end of the fire investigation.  Sunday morning, when it came time to get the buses, the fire reignited and the buses that belonged to Central UTA-Satmar that is affiliated with Rav Aron Teitelbaum were off-limits, as they were stored on that lot.

In a heart-warming act of support and solidarity, reports JP Updates, UTA-Satmar affiliated with Rav Zalman Teitelbaum – with more buses in their fleet than those others impacted –  graciously allowed use of their buses to the other school so children could get to studies on time and safely.  Pupa Yeshiva also loaned four of their buses to the cause.

Pinny Ringel and Avi Fink of the Mayor’s Office stayed in touch with the situation and worked with the OEM, Sanitation Department and FDNY in helping the school assess and respond to the situation. At this point in time, Central Satmar-UTA (Aronim) have use of their buses again, but for a short while, there was unity of effort in busing that should set a new standard of achdus in Williamsburg.

This comes just a week after the yeshiva of Satmar located in Queens, NY, that is affiliated with Rav Zalman Teitelbaum were vacated from their building Friday Nov. 6th by City officials.  After a week of back-and forth with city officials , and in that incident, the community activist from that Yeshiva reached out to Rabbi Moshe Indig of the other Satmar faction (Aronim).  Rabbi Indig went to bat for them and worked with the mayor’s office to resolve the issue. JP Updates