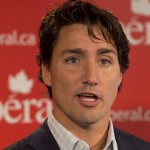 Justin Trudeau, the son of one of Canada’s most charismatic politicians, will be Canada’s next leader, after a dramatic federal election in which the prime minister, Stephen Harper, lost his parliamentary majority and nine years of often-unpopular rule by the centre-right Conservatives came to an end.

Polls had only just closed in Ontario and Quebec when the Canadian Broadcasting Corporation called the election for Trudeau, based on a near-wholesale collapse of support for the left-wing New Democratic party (NDP), as well as a powerful Liberal surge.

Speaking at Liberal headquarters in Montreal, Trudeau said: “This is what positive politics can do. This is what a positive, hopeful, a hopeful vision, and a platform and a team together can make happen.

“Canadians from all across this great country sent a clear message tonight, it’s time for a change in this country, my friends, a real change,” he told supporters.

In his concession speech before a despondent Calgary crowd Monday night Harper did not formally announce his resignation, instead focusing on thanking his supporters.

“We put it all on the line, we gave everything we have to give, and we have no regrets whatsover,” he said, adding “the disappointment you feel is my responsibility and mine alone.”

However, in an email to reporters, the Conservative Party announced that they would be seeking an interim leader in the coming days.

The scale of the Liberals’ dual victory – over the Conservatives and the NDP – remained unclear. But Trudeau will be the next prime minister of Canada, with a parliamentary majority. The question now is how strong his majority will be.

The Conservative casualties of the night included a string of former high-profile cabinet ministers. In the key Greater Toronto suburb of Ajax, former Liberal MP Mark Holland stormed back to re-take his seat from the Conservative immigration minister and former Canadian ambassador to Afghanistan Chris Alexander.

Ajax had been thought to be close, but with some ballots still uncounted, it lseemed that Holland had established a lead of almost 30 percentage points.

Read more at THE GUARDIAN.