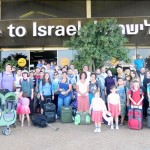 Immigration to Israel rose by 10% in 2015 compared to the previous year thus making it the year with the most immigration since 2003.

Estimates released by the Israeli Ministry of Aliyah [Jewish immigration to Israel] and Immigrant Absorption and by the Jewish Agency show that more than 30,000 new ‘olim’ moved to Israel in 2015.