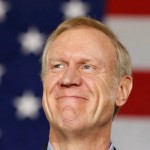 Illinois Governor Bruce Rauner said on Monday that if the state legislature passed a bill that would allow the recall of Chicago mayor Rahm Emanuel, he would sign it into law.

Rauner also said the he was “very disappointed” with Emanuel for his handling of police brutality issues in Chicago.

Though some have called for his departure from office, Emanuel has said he will not resign. Read more at the Chicago Sun-Times.