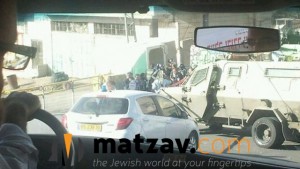 [Updates below.] An Israeli soldier has been wounded in a stabbing attack in Chevron this morning that continued a wave of similar attacks beginning approximately one month ago.

The victim is a member of the IDF’s Kfir Brigade.

The Palestinian attacker was reportedly shot and killed on the scene by a border policeman.

Update: The policeman is said to have been lightly wounded.

The officer was stabbed in the head.

Update, 9:39 a.m.: The attack did not take place in Chevron proper, but at Turn 160 on the road connecting Kiryat Arba to Chevron.

The terrorist is a a 23-year-old resident of Chevron.

The soldier was take to Hadassah Medical Center in Yerushalayim.