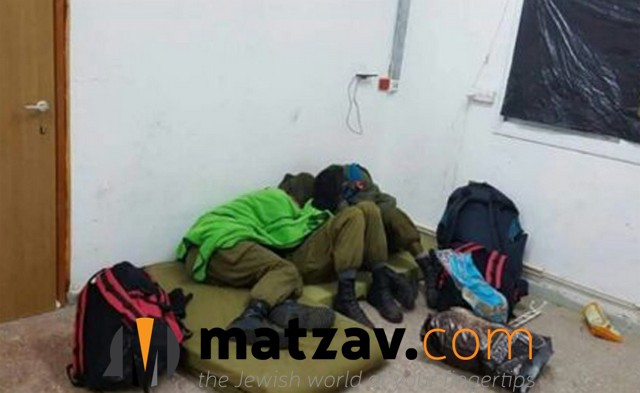 An IDF soldier who documented the poor conditions in his military base in the area of Mitzpe Ramon was sent for three weeks in prison. The soldier complained that he and his comrades were cold and that the conditions at the base were not adequate.

In the photo, which eventually made it to Facebook, several soldiers from the IDF’s Artillery Corps are seen lying in the corner of a room on one mattress, with barely anything to cover them. The soldiers claimed they received no blankets or heating equipment.

The soldier admitted to taking the photo and claimed he had done so in order to file a complaint. His battalion commander asked to try him, but the soldier refused and asked that his trial be held by the military court instead. The military prosecution refused his request, and today he was sentenced to three weeks in military prison, starting tomorrow.

When Channel 2 News contacted the IDF last week, it was claimed that the soldiers fabricated the photo, but the IDF said they did not plan on trying the soldiers. The soldiers refuted the claims of fabrication and stressed that these were in fact the conditions at the base – the window was broken and there were no mattresses.

“Soldiers are afraid to complain,” claimed one of the soldiers from the battalion. “There is no reason to send him to prison for three weeks as if he were a criminal. It is an unreasonable punishment.” The IDF claimed in response that “Contrary to what is portrayed in the photo, the soldiers slept in an air-conditioned room throughout the night on a mattress, sleeping bad or blanket. The soldier was tried for improper conduct and dishonoring the IDF.”