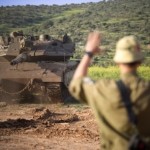 Four months into the current wave of Palestinian terror, the Israel Defense Forces is changing its operational deployment in the West Bank and returning to positions it had abandoned in previous years.

A permanent garrison has returned to the Shdema outpost near Beit Sahur in the Bethlehem region, which had been abandoned in 2006.

The IDF also confirmed that it plans to build several new pillbox guard posts in the Nablus region.

The army is continuing its policy, begun two months ago, of putting military checkpoints at the entrances and exits of Palestinian towns from which large numbers of assailants have come.