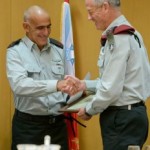 Bachar, with a honed, battle-hardened record – including a reputed 27, mostly Hezbollah terrorist, kills to his name – was on Tuesday appointed commander of the General Staff Corps in place of Gen. Gershon HaCohen.

“The legend, by the way, is correct for the most part. Bachar is highly respected by his troops, and should have gotten the promotion a long time ago,” a senior army officer who is acquainted with Bachar said.

Anyone who went through the IDF sergeants course in the 90′s remembers watching screenings of aerial videos capturing IDF ambushes of Hezbollah cells in mountainous southern Lebanon, the author of the Channel 2 report notes.

In one instance, the Israeli force is seen holding its fire until the Hezbollah personnel get very close, and then, one figure is seen rising and opening fire, alone, wiping out most of the enemy.

The author served in the revered Paratroop Unit 101, when Bachar was a Battalion commander.

In 1999, Bachar took over command of the secretive Maglan (“Ibis”) unit, which is said to operate behind enemy lines, and saw an intense amount of action in Gaza.

Nearly all of the unit’s activities are under IDF censorship. However, those who served with Bachar said that, during his tenure, “many” Hezbollah members died – and say no more.

“Yossi always insisted on leading his men into battle, and he’s a warrior and officer with a comprehensive vision and comprehension,” according to Defense Minister Moshe “Bogie” Ya’alon.