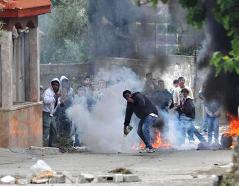 The Israel Defense Forces has declared a high alert in Judea and Samaria after riots broke out in the area over the weekend. The IDF is concerned that Palestinian violence may escalate to include the use of Molotov cocktails and potential stabbing and shooting attacks, Israel Hayom reported.

The riots followed the killing of three wanted Palestinian terrorists in the Jenin refugee camp on the 10th anniversary of the death of Hamas cofounder Sheikh Ahmed Yassin.

Sunday afternoon saw Palestinians and Jewish residents clash near the outpost of Ramat Migron, throwing stones at each other, according to military officials. Several hours later, dozens of Palestinians began throwing stones and hurling Molotov cocktails at security forces stationed near Rachel’s Tomb, on the outskirts of Bethlehem. A similar riot was noted in the nearby al-Aida Palestinian refugee camp.