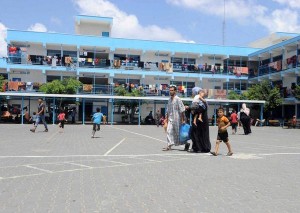 The Israel Defense Forces (IDF) has accused Hamas of preventing civilians from evacuating a United Nations Relief and Works Agency for Palestine Refugees in the Near East (UNRWA) shelter in the northern Gaza city of Beit Hanoun, where at least 16 people were reportedly killed and more than 200 were injured in an apparent strike on the compound.

“Hamas prevented civilians from evacuating the area during the window that the IDF gave them,” the IDF Spokesperson’s Unit said in a statement.

The IDF said Hamas fired from Beit Hanoun and that soldiers responded by targeting the source of the fire.

There have been conflicting reports on who was responsible for the strike on the UNRWA compound. UNRWA spokesman Chris Guiness had initially tweeted that Israel was responsible, tweeting “BREAKING NEWS: UNRWA school sheltering displaced in #Gaza takes a direct hit from Israeli fire, 5 injured RT.”

But several hours later, Guiness retracted his statement and said he was investigating the incident, tweeting, “When I have double checked and confirmed information about reports of the UNRWA school in Beit Hanoun #Gaza I will tweet. Should be soon RT.”

The IDF said it was investigating the situation, but noted that several rockets launched from Gaza towards Israel fell short and hit Beit Hanoun.