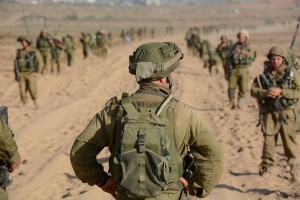 Israeli army and security forces arrested seven Palestinians near Chevron, thwarting, what officials said were plans for a “major” terrorist attack over Rosh Hashanah, according to Israel’s 0404 news site.

Soldiers from the army’s Duchifat (Hoopoe) Infantry Battalion apprehended the suspects in the village of Kafr Sair.

“The suspects were taken for investigation, but we can already say that this is a big success for the intelligence echelon,” an official said. “This was an excellent operation by the Shin Bet (Israel Security Agency) that uncovered the terrorists’ plans and foiled a terror attack.

“The Hamas terror organization is unceasing in its efforts to hurt Israelis and IDF troops,” the official said.

Along with the detainees, IDF officials said they uncovered large amounts of ammunition and knives to be used in the attack, that was to have been perpetrated on one of the Jewish communities in the Gush Etzion area, south of the capital.

The officials’ comments on the capture of the cell reflect a significant spike in terror attacks against Israelis in and around Yerushalayim and its vicinity in recent months.